SHAH ALAM, March 11: Two Mad Velocifero 1600 electric scooters were donated to the Shah Alam State Mosque and Al-Ikhlas Mosque, Section 13 to facilitate the mosque's regulatory affairs. Chief Executive Officer Cervello Tres, Azrul Helmy Hafiz, said the contribution was worth RM13,000 and the maintenance would be carried out by the company.

"We are initially intending to give the mosque a place for management and Alhamdulillah today we can implement it. "In terms of maintenance, the mosque needs only a phone if there is a problem with the product. "We will continue to establish relations with other mosques if interested, but willing to benefit for the common good," he told SelangorKini. Cervello Tres owned by the three young people is a new company based in the country, though the welcome is very encouraging. Azrul, who is also a native of Selangor, expects 10,000 units to be sold in Malaysia until the end of this year. "We are responsible for expanding this electric scooter market not only in Malaysia but Singapore and Brunei.

"So far the response has been very encouraging, we have already received 2,500 units of orders," he said. Meanwhile, Imam Besar of the State Mosque, Muhammad Farhan Wijaya hopes the grant will facilitate mosque staff to regulate the surrounding area. "Thanks to the contributing company. "Hopefully this contribution will facilitate the administration of the mosque from the regulatory and other places. God willing we will use it better, "he said. 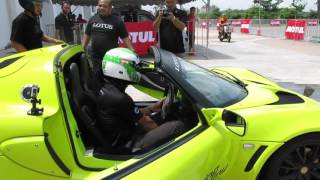